Epilepsy is the most common neurological disorder in the canine species with 5% of affected dogs, belonging to over 50 breeds. The high prevalence of epilepsy in some breeds, reaching frequencies over 20%, leads us to suppose a genetic origin. We make the hypothesis that each breed or a small number of breeds develop one form of epilepsy linked to a specific genetic reason, coming from a founder mutation during the breed creation. Thus, the study of the molecular bases of epilepsy in these different breeds would allow to increase the number of candidate genes for human epilepsies for which the genetic bases are still unknown..

The discovery of the implication of the EPM2B gene in the Lafora disease in human (progressive myoclonus epilepsy form) and in an epilepsy affecting the miniature wire-haired dachshunds demonstrates the interest of this model (Lohi et al., Science, 2005).

To identify the genetic bases of this affection, we are looking for blood samples of epileptic dogs and their affected or healthy relatives in order to extract the DNA. The strategy of research of the genetic bases consists in the comparison of the genomes (the 38 chromosomes + XY) of a high number of affected and healthy dogs within the same breed in order to identify the chromosomal region(s) containing the gene(s) implicated in the epilepsy as well as the causal mutation(s). The last step corresponds to the validation of the mutation in the studied breed, as well as breeds that are phylogenetically related.

In our “Dog genetics” team of the CNRS in Rennes, research projects on epilepsy are currently investigated in several breeds:

Concerning the Greater Swiss Mountain Dog, the genetic study on epilepsy began in 2005 in collaboration with the French Swiss Mountain Dogs club (AFBS), and is now continuing as part of european projects. A pedigree of over 200 Greater Swiss Mountain Dogs in which one form of primary epilepsy segregates was constituted. The mode of transmission appears monogenic autosomal recessive. This early-onset epilepsy (between 1 and 5 years of age) is characterized by generalized seizures with loss of consciousness, which frequency varies depending of the dogs, their age and their treatment. A genetic linkage analysis by whole genome sequencing have identified a locus associated with the disease and genetic analysis is underway.

Concerning the epilepsy of Cane Corso, the study of the genealogical tree of more than 100 dogs has allowed us to hypothesize that the most likely mode of transmission of epilepsy in this breed is monogenetic autosomal recessive. For this study, we are sequencing complete genomes to identify the gene (s) responsible for the disease

In breeds affected by epilepsy, samples of affected dogs and their healthy and affected parents are needed to continue our research.

To participate in this research, please send us:

Like this Cane Corso, participate in our study to advance the research : 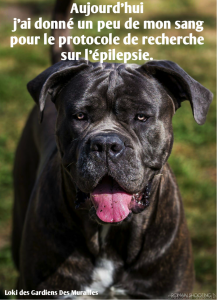 We remind you that the data collected at the CNRS are confidential.